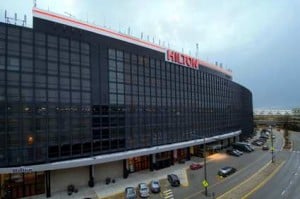 If you are one of millions of people worldwide that suffer from allergies, asthma or other respiratory conditions, you may want to consider checking out the accommodation facilities at the Hilton O’Hare, Chicago USA.

In 2005, it was one of the first hotels of it’s kind in the US to take it’s indoor air quality standards to task. Located close to the O’Hare Airport, it offered healthier “allergy resistant” rooms for it’s guests afflicted with sensitivities and reactions to dust, mould and chemicals.

Research by the Asthma and Allergy Foundation of America found 75% to 85% of asthmatics have positive reactions to skin tests of house dust. Common house dust is composed of many asthma and allergy triggers such as animal danders, moulds, spores, pollen, dust mite, cockroach allergens. The triggers can aggravate respiratory problems including asthma, phlegm in throat, runny and blocked nose as well as coughing and sneezing.

The pilot project involved designing special rooms for the Hilton by Nicholas Nardella from Environmental Technology Solutions, Glen Ellyn, Illinois, USA. It involved gutting and then retro-fitting two rooms with environmentally friendly products and materials such as a dehumidifier.

Everything contributing to poor indoor air quality was addressed. Standard carpeting was replaced with hardwood flooring, easier to clean and minimise dust. Door hardware, plumbing fixtures and other frequently touched areas were coated with an anti-bacterial coating to eliminate germs.

All paint, adhesives, coatings and furniture were free from volatile organic compounds (VOCs) and other gases. Fabrics such as furniture and drapes were manufactured with a Environment Protection Agency (EPA) approved materials. The wall paper is perforated to prevent moisture from getting trapped and breeding mould spores.

Air purification systems were set up in each room, collecting 99% of airborne particles and gases. A monitoring system allowed the hotel to maintain proper levels of odours, gases, carbon monoxide, humidity and temperature, minute by minute. Mr Nardella said “If for example housekeeping walked in and started using ammonia or another cleaner that off-gases, the hotel would know in 10 minutes, instead of days later.”

Mr Nardella added there was a “premium” initial cost for the construction upgrades. He did not offer a figure at the request of the hotel but did say that the chain expected a return on it’s initial investment in less than two years. The rooms were rented virtually every night and booked far in advance.

Hilton is looking to expand the pilot program to include 500 rooms across 10 cities. Source: Reed Business Information (US) 2005