Are you having guests coming over and now your indoors smell musty? Or are you the kind of person who constantly has black spots all on the walls no matter what you do? Does it seem like there is no way to get rid of the mould in your home?

Well you are in luck, cause we are about to explain.

Indoor Mould: 3 Ways to Get Rid of It!

‘multiple types of fungi that grow in filaments and reproduce by forming spores. Mould may grow indoors or outdoors and thrive in damp, warm, and humid environments, essentially in any environment or season, on any substance of plant or animal origin.’

One more thing, ‘molds reproduce by forming tiny spores that are invisible to the unaided eye and float unnoticed through the air and land on surfaces where there is moisture and start growing.’ 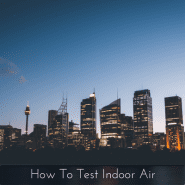 This is the most common sign of all the mouldy indoor environments and yet the least observed because they start because of lack of understanding and recognition. Sometimes you’ll experience these symptoms on and off in your home which can cause your entire family dis-ease.

You may also not see this mould growing anywhere in the building. It’s really easy to brush off symptoms as nothing of concern and when you leave the mouldy building, you feel better. The hopeless thing about allergic symptoms to mould is that it’s easy to totally miss the diagnosis for some time if ever. It may only show up in sneezing and can’t stop coughing, headaches and tiredness that are similar to having the flu in which case a little medication and rest will do the trick.

Mould by stealth is invisible from most surfaces of materials in spots that don’t get a lot of light, though you can smell it. It’s there! Mould you’ll find in stagnant, dark spaces and sometimes can be mistaken for poor cleaning practices or damp materials that somehow never got dried properly.

This mould is difficult to get rid of and won’t be killed off by any normal dose of sanitizer (such as bleach) or a washing agent. You need to kill it by looking for the trigger or else you’ll be battling with it for what seems forever

How To Get Rid Of Mouldy Smells In A Room

Got mouldy smells? Here’s a very simple 10 step guide that will walk you through how to remove stubborn mouldy smells from your home. 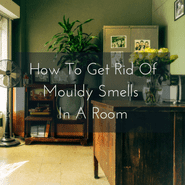 If you ever had mouldy smells and thought that was tough, think again. Moulds appear and spread, although the not so good thing is it’s very common. What makes visible mould so hard to get rid of is the dispersion to more materials and rooms, it’s potential to be a larger colony than first thought. This mould looks like little dark, black spots, grey colonies or colourful growths on your walls, windows, ceilings, flooring and your furniture. Gross!

The part that you can see is the mycelium that is growing out in all directions forming a circular pattern across the surface, and hyphae growing above and below surfaces like the plaster in your walls. Just like visible mould, it can appear even if you are taking care of your home normally and all your ventilation levels are correct. To kill it you will need fermented white vinegar and lots of elbow grease and find where it started.

How to Kill Mould In Your Home

Toxic mould is perhaps the hardest mould to get rid of. Follow this step-by-step tutorial to help get rid of toxic mould in your home fast.

Why Do I Have Mould?

Where there’s water, there’s mould. Which is why buildings need to be ventilated with air to ensure nasty bacteria and other growths don’t get into our homes and offices.

The main reason why mould grows in your home is because building and soft furnishing materials haven’t been dried properly after getting damp, or hasn’t been exposed to enough light.  Also, when your building is lacking ventilation, air circulation and the moisture is stagnant, you’re gonna get mould. That’s why it’s important to keep the indoor air moving by opening windows and doors and moving furniture. It’s hard for mould to grow when the air is drying.

Mould also loves dark places that don’t get much air circulation including:

These are all great spots for mould to feed and multiply.

So now that we have a general understanding of what indoor mould is and why it forms, we must destroy it!

Method #1: Get Rid of Mould by Remediation

There are 3 different stages of mould in which different amounts of remediation are needed, there is:

These are 3 different stages of mould, at differing amounts. The more mould in your home, the more spread out the infestation will be. I’ve seen homes almost consumed by mould infestation. Gross!

If you suspect you have hypersensitive symptoms you need to thoroughly check your building in order to kill mould. Finding the trigger point is important. So, if you have a leaking roof or gutter spilling into the eaves and ceiling cavity you need to remediate it by fixing them.

If you have surface abnormalities like peeling, bubbling or cracking of the paint or wallpaper you need to remediate it by drying moisture that has gotten into them.

If you have wet and forgotten damp furnishings from flooding and poor drying practices you need to remediate it by throwing them out, and so on.

Seeing Mouldy Indoors (Stuff Hollywood Horror Movies are Made Of)

If you have a mouldy surface area the size of a standard door size or less, you need to remediate your affected area in order to kill mould. So, it’s always best to book chat time with a Building Biologist with their experience and knowledge of spots and triggers where mould often hides.

If you have a fuzzy veil of mould on larger surface areas that resemble the stuff Hollywood horror movies are made of, you will need to bring a Building Biologist on site. So, if you have an expert to discuss, assess and test mould, they can determine the size and extent of the mould colony before professional remediators can begin to remove it

I believe you should spend less time figuring out what to do (that is my job) and more time breathing easier, living easier. I cut out all the fluff and confusion to indoor air quality maintenance and strip it down as a Building Biologist. Adverse health effects and effective strategies reduce occupants’ exposure by eliminating and controlling as many sources of pollutants as possible. 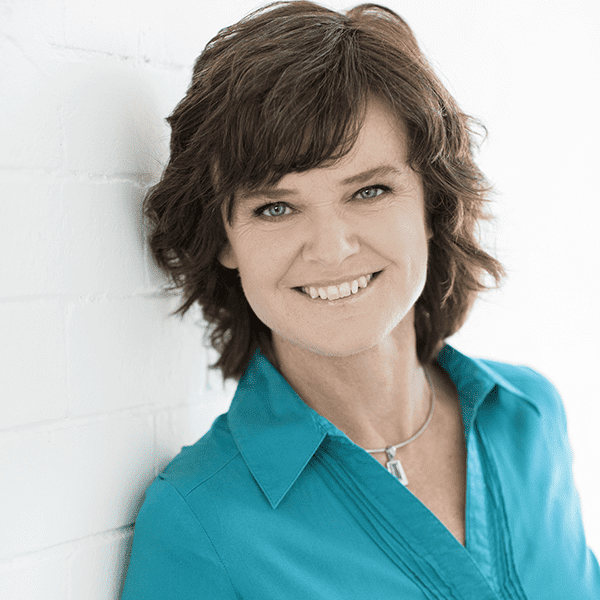 Note: If you live on ground floor apartment block, you should check neighbouring apartments on the same floor and above yours. This will assist in determining if there is more to your mould than you first suspected in your place. Also NEVER CLEAN WITH BLEACH. We cannot stress this enough. Bleach is often regarded as the answer for removing and halting mould growth, bleach actually contributes negatively to certain mould problems. Chlorine bleach creates toxic chloramine vapours and is classified as hazardous.  And remember, always open windows when cleaning mould, bleach generates a by-product called dioxin, which is linked to cancer.

How to Remediate Mouldy Places

Fermented White Vinegar is a natural acid which kills bacteria and germs and nearly all mould, most probably by denaturing (chemically changing) the proteins and fats that make-up these nasties. It’s totally non-toxic and safe of course, you can drink it you know! It’s also biodegradable and environmentally cool. After all the mould is dead, it’s your job to wipe them OFF your walls, ceilings and furniture.

This method is more work and can be time-consuming, but gets rid of mould fast, if done correctly

I always recommend a pure fermented white vinegar like Cornwell’s. It is Australian made and very effective for keeping mould from growing in your home. 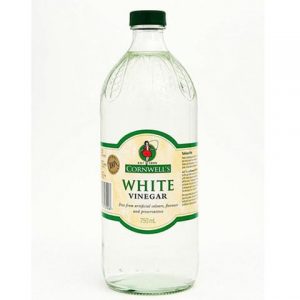 Here is a step by step guide on vinegaring your mouldy space (area less than a door size):

To remove mould from clothes and linen, soak them in a half vinegar and half water solution overnight. Then rinse the vinegar out of the clothes, wash them in the washing machine with normal laundry detergent.

If you have a spray bottle of vinegar in the bathroom you can prevent mould by using it every week after a shower. Spray the shower curtain, walls, tiles, basin and bathtub after you finish showering.

With just a little bit of elbow grease and this cheap acid, you can have your mouldy surfaces cleaned in one day if you’re willing to do the work.

When you are done cleaning the affected surfaces and everything looks good, I would suggest double checking your room to make sure ALL the mould has either been removed or destroyed.

I’d recommend vinegar solution weekly as a preventive and should be used throughout the year.  The reason is, once you start cleaning with vinegar that can kill mould, the vinegar solution starts cleaning up bacteria and germs too. You can mop your floor with vinegar each week, spray vinegar on your bathroom and kitchen walls too.

I always recommend a pure fermented white vinegar like Cornwell’s. It is Australian made and very effective for keeping mould from growing in your home.

Which Method Is The Best?

All of these methods work. In fact, you might visit three different websites or talk to three different people and they will usually just promote one way of doing it. This is why getting your mould care information from different places can cause confusion.

My recommendation is using which method is appropriate for the situation. Method 1, it’s effective, it’s progressive, and it PREVENTS all the mould. I use Method 2 when I’m in a pinch, like when guests pop in THIS WEEKEND, oh no! and method 3 is for those who are reading this for the first time, suffering from mould in their home.

As a Building Biologist, I have acquired knowledge of adverse health effects and recommend effective strategies to reduce occupants’ exposure by eliminating and controlling as many sources of pollutants in order to create healthy indoor living environments that are as exposure-free and natural as practically possible

Print this handy indoor air care planner and put on your fridge so the whole family can help take care of the indoors this year. 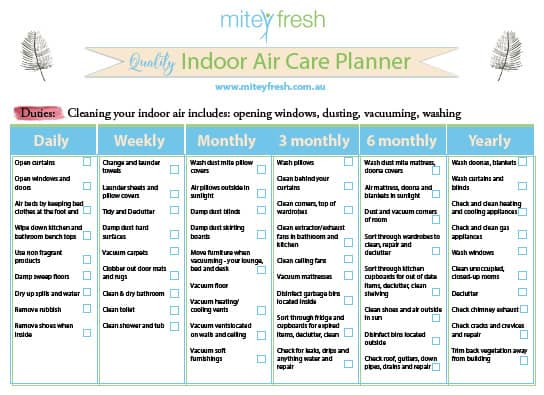 2 thoughts on “How to Get Rid of Indoor Mould”